How to fit a Schwalbe Marathon Plus

Ok you’ve found this page because you’ve just spent several hours trying to mount a Schwalbe Marathon Plus onto your bicycle wheel and this seemingly simple 10 minute job has left you exhausted, possibly bleeding and probably a little hoarse from screaming “GET ON YOU FUDGING BAR STEWARD, MOTHER LOVING SACK OF SUGAR” at an inanimate object.

What you may have found on embarking on this endeavour is that you get the bead of the tyre onto 90% of the rim and then spend the next two hours chasing the last 10% of the tyre around the rim bending your tyre levers on the way. Before you jump up and down on your wheel or march back to your local bike shop and shout at a spotty teenager for selling you the wrong size tyre, I have two words for you. 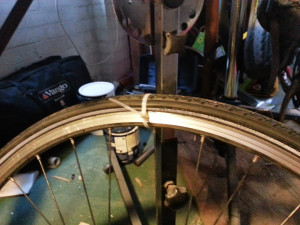 You may know this trick, but if you don’t it works very well with Schwalbe Tyres, some of which are an absolute pig to get onto a rim, Hans Dampf I’m talking about you. Here are the steps:

Hope this tip saves you some time and energy.

Building a mountain bike for the first time.

It’s about a year since I bought my first mountain bike, a brown On One 456 with a 140mm Rock Shox Revalation RLT Ti fork, full Shimano SLX drive train and Avid Elixir 3 brakes and about 5 months since it was stolen. Since then I’ve been trying to decide what to ride next, first it was a carbon 456, then it was an On One Lurcher, but I’ve ended up with an Orange Inbred 29er frame because I was told that the Lurcher was not available until May, as it turns out that wasn’t true and I could of had one.

So I’ve ended up with a bit of a compromise, an over priced compromise at that, as On One have just dropped the price of the Inbred frame by £60 which leaves a bitter taste in the mouth and takes the shine of ones purchase.

Often it’s the jobs that you think are going to be hard that are very straight forward and the jobs that should be easy have been a bit of a nightmare. I’ll run through them briefly

Installing the bottom bracket and crank (easy) – with the right tool this was very easy. Grease the threads, screw in the two parts by hand to avoid cross threading and firmly tighten with a bb spanner.

Installing headset cup (f*&king nightmare) – Tried installing these with the bolt and washer approach as seen on you tube. First stab was with metal washers from B & Q and it was impossible to get the cups into the frame straight, and top cup did get a little damaged during the process but as these are not moving parts it hasn’t effected the performance of the headset. Next attempt was with this ghetto headset press which did work a little better and I eventually got both the top and bottom cups in. I spent about £20 on bolts and washers and I could have had the Cyclus Headset Press for £33.43 shipped with my Wiggle discount. So a bit of a false economy, if I were to do it again I would invest in correct tool for this particular job.

Installing the fork (fairly easy) – I bought this pipe cutting tool and it works brilliantly, I had a pratice with it by lopping of the top 10mm of the steerer, this went well so I measured it up by installing it with headset and required spacers (I’ve gone 15mm under the stem and 10mm on top) and chopped it. Getting this right is a little tricky and a few mm shorter is better than a few mm too long, especially as the tool’s clamp means that there is a minimum cut length of around 10mm. I’d cut just below your mark rather than on it or above it. This is a good video on how to cut a steerer tube.

Getting Tyres onto Rims (Hard) – This was very difficult due to a combination of Stan’ s Rims and Schwalbe Hans Dampf tyres and lack of technique. For anyone struggling with their tyres, the first bead of the tyre has to be sitting in the groove in the middle of the rim, if it’s not you will not have the slack to get the second bead on. Even with this technique I still needed tyres levers to seat the last section.

Installing & setting up gears (Tricky) – There is a lot to go wrong here as there are many parameters and settings to consider. Finding the right combination of front deraileur and shim to make it fit a 28.6mm seat tube was the first big challenge. After tweaking limit screws for a couple of hours I worked out that the barrell adjuster on the shifter could be used to correct tension the cables, adjusting this also stopped the rear mech clicking. The problem is that it is seldom one thing but a combination of factors leading to unsatifactory performance.

Brakes (Straight Forward) - These have been fit and forget, at some point I will need to shorten the rear brake cable but as it is working at the moment I am reluctant to work my particular brand of fecal magic on it.

Overall it’s been a horrible nightmare, there are so many standards and compatibility issues that it’s very difficult to make the right desicions when buying. At one point I had 4 X9 front deraileurs on my work bench and the correct shim and I still could mount any of them. It seems often the manufacturers don’t know whether what they’re making will fit.

If you’re thinking of building a bike for the first time, DON’T, I implore you, it is, for the most part a soul destroying, time evapourating, hair extracting all consuming misery. If there is a hell I suspect it is filled will lawyers and BMW drivers trying to build bicycles from scratch. On the odd occasion, when I’m greasy and bleeding in the early hours of the morning, it goes well and there is a great sense of accomplishment. This usually evaporates in the cold light when the expensive part you slowly, lovingly fitted according to the intructions and with the right tools disintergrates because of some obscure compatibility issue, or you forgot to face and chase the deliniated nipple flanges or beacuse of plain bad luck.

If you want an overpriced bike that doesn’t work made out of tears and pain, build your own, otherwise I suggest using your local bike shop.

RT @chance_m_morgan Isn’t it weird how we as a society arrived at “monetize all your hobbies to support yourself” before “rich people s… twitter.com/i/web/status/1…

RT @larrymeath If you’re in trouble, or hurt or need, go to the poor people. They are the only ones that’ll help - the only ones.” John Steinbeck.

The soundtrack to my internal monologue. youtu.be/_lAfMT5FIZE

Even Thom Yorke is more optimistic than me. twitter.com/thomyorke/stat…

Let the descent into Rummikub begin.

RT @Geology_History January 21, 1793, Louis XVI of France is executed by the guillotine in Paris. Many political & economic factors pla… twitter.com/i/web/status/1…

RT @JFennellAuthor Greta Thunberg waiting in the tall grass for as long as it takes. pic.twitter.com/BFecxCAvRt

RT @TheReal_JesusC If Joe Biden says he can't afford Medicare for All, just rebrand it as "Bombs for Venezuela." He will find the money.

RT @DaveWardGS What sort of world do we live in where we’ve allowed the media and their billionaire friends to present a bloke who… twitter.com/i/web/status/1…