It feels like I’ve been riding on snow for a while.

It’s been a while since my last entry, the discipline of writing a diary is not a natural inclination but I enjoy looking back through past entries and this encourages me to write the next one.

I suppose I have several good excuses, we moved house in March, I had to find a new job in June, the baby was born, 4 weeks early in August… all in all 2012 was pretty hectic.

I did find time to do the 12th Hope Valley Mountain Bike Challenge on the 15th of September with a few mates, this is billed as a 50km off road ride around some of the Peak District’s classic descents starting from the base of Win Hill. The route has regular water stops with mountains of home made cakes provided by the organisers, with out this and a Camelbak containing a cocktail of energy powders and caffeine tablets I think I would have struggled more. I genuinely believe regular slurps of carbs, sugars and salts prevented the peaks and troughs in my energy levels, and certainly avoided the grumpiness I suffer from when tired and hungry.

The route took in The Beast, riding this with a cascade of other cyclists buzzing around you, shouting to let you know where they are and crashing in front of you, was an experience that seems to have spurred me on and I have yet to improve on the time set during this event. A long steep muddy climb out of the belly of The Beast brought us looping back to the top of Win Hill, the route took us up the Roman Road for the second time but we went left at the cross roads down to Jaggers Clough.

Other moments that stay in the memory are the hike up Jacob’s Ladder, this is hard work without a bike, and the general camaraderie and good nature of everyone involved in the event. We plan to do it again this September.

The rides have been sporadic at best. Lambo, Jim and I did manage to get out on a Boxing Day ride around Lady Bower. Do you remember all that rain? It was muddy and the water in the reservoir was so high it had breached the retaining wall and was cascading down the side producing an impressive water fall effect, an eventuality that was clearly planned for in its design. 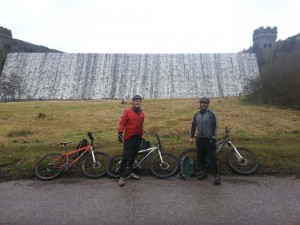 No Excuses rides have taken more than a back seat, it has got out of the car and been left in a layby on a remote hill side. This is a shame and has had an impact on my fitness, so much easier to lose it than it is to maintain it.

It feels like I have been riding on snow for a while, this is because I have, January and February have both been inclement and have produced some bracing temperatures and interesting riding conditions, burning all my energy pedalling but not moving up the Wyming Brook climb, trying to get to Stanage Pole but failing due to the depth of the snow and travelling sideways down Clough Lane were all features of the ride of the 26th of January. 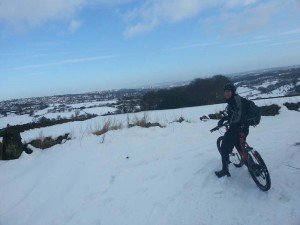 We’re at the end of February and the weather seems to be improving and I will have no excuse to not start riding to work again. This will improve my fitness and encourage me to get out on the mountain bike a bit more.

Bring on the spring.

RT @TheMendozaWoman I’m really gonna enjoy Corbyn entering his “zero fucks left to give” phase as he winds down his leadership of Labou… twitter.com/i/web/status/1…

RT @gagandboreme i feel like this ad is relevant right now pic.twitter.com/MMLhyW3xF4

I used the phrase Performance Optimisation Opportunities in a meeting today and no one noticed I was talking POO.

RT @TomLondon6 THREAD Albert Einstein was a proud Socialist. He wrote these words in 1949 - very relevant in 2020. "Private capit… twitter.com/i/web/status/1…

RT @DerbyChrisW CONCLUSIVE I defeated Labour's broken bureaucracy in the High Court: they must now pay all my costs, which will he… twitter.com/i/web/status/1…

Starmer is a Tory. Pass it on.